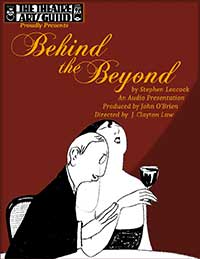 An Audio Presentation produced by John O'Brien, and directed by J. Clayton Law

Join humorist Stephen Leacock for a night at the theatre with a production of the scandalous Problem Play, Behind the Beyond.

Lady Cicely is deprived of life, and seeking a way out of her languishing existence with her husband, Sir John Trevor, a politician in the House of Commons. With Jack Harding, Sir John’s secretary, she plots a way to run away with him. Meanwhile, Jack's mother, Margaret, has sent a letter to Sir John saying she is on her way, reminding him of his past deeds. How long can one run from reality? Can one truly hide from truths and revelations behind the beyond?

Based on the book, Behind the Beyond, and Other Contributions to Human Knowledge by Stephen Leacock, 1913.

From the deck of the HMS Patagonia to the local village shop, a shop assistant pursues a travel writer for marriage in TAG's first inter-provincial production. Will she have the nerve? Will he see reason?

Jack, with the sun touching him, has returned home three years after WWI to marry his fiancee, Daisy, but she has jilted him for another man. Will Jack have the strength to fight for her, or the love to let her go?

In 2018, Telescope embarked on a journey in search of new and unknown pieces of poetry. It's time to get going again. Come with us as we hear tales of love, of loss, and adventure from Mesopotamia to the present day.

He's done it! Charles "H." Stone has written his first novel! Before he shares it with the world, it must face the scrutiny of Alice, his chief critic, and wife. What will she think of it? Will it pass her scrutiny, or would he have a better chance reading it to the dog?

In the quiet town of Cochrane, Ontario in the mid-1990s, rumours surround two young lovers, Chris and Cayleigh, after they left a birthday party one Saturday night. As the town speculates, Cayleigh is sneaking out, Chris has run off, and her brother Jeremy seeks justice. But what really happened that night? What really happened between Chris and Cayleigh at the bandstand.

A rewrite of Telescope's first audio play, and a deleted scene from Thought, Word, and Deed. Taylor has entered a pizzeria to wait for their blind date. The only other person in the room is their best friend, Charlie, also waiting for their date. Who are they waiting for really in this a-dork-able romantic comedy?

Stay, or go? Claire has woken up on a stranger's raft after getting rescued. As he tries to show his niceness, she digs to find his true colours. Does she stick around for lunch, or cut her losses and bolt?

Join Telescope as they explore new and unknown pieces of poetry from the Dada movement, to The Rose Theatre, and to present day. Welcome to The Poetry Nebula

Ron has everything he's ever wanted: a home by the ocean, a beautiful, doting wife, and his dream job. But something is amiss. It's almost too perfect, and he hears voices calling him back. Back to where?